In this episode of the ROI Online Podcast, host Steve Brown speaks with Patrick Hanlon, author of Primal Branding. Patrick works with a number of large brands, and his unique book has grown in influence over time; the book has a perennial nature, and its popularity grew at a slow burn, rather
Category: Business & Tech
Publish Date: May 06, 2020
Jump to Full Description
Snippets are a new way to share audio!
You can clip a small part of any file to share, add to playlist, and transcribe automatically. Just click the to create your snippet!
Snippets: Clips of [Special Episode] Patrick Hanlon On The Components That Fuel Successful Brands — The ROI Online Podcast Ep. 4 that people like
Add to Playlist
Share

08:24
Your Brand And Your Community | Patrick Hanlon
Business & Tech
Add to Playlist
Share 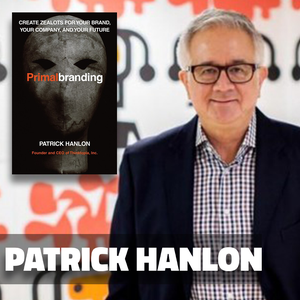 The Components That Fuel Successful Brands - Patrick Hanlon
01:15:45 5/17/21 5 audios
Up Next
Full Description
Back to Top
In this episode of the ROI Online Podcast, host Steve Brown speaks with Patrick Hanlon, author of Primal Branding. Patrick works with a number of large brands, and his unique book has grown in influence over time; the book has a perennial nature, and its popularity grew at a slow burn, rather than exploding onto the marketing scene in a flash and quickly growing obsolete. The book grew out of Patrick’s perception that a number of brands were not representing themselves in as authentic and compelling a way as they could. In his book, he works through the code that underlies effective branding. This code is common to all kinds of messaging trying to appeal to people, from that of a church to that of any business. The seven components of the code are creation story, ceed, rituals, icons, sacred words, non-believers, and leaders. The code is a strategic brand narrative, and understanding it helps consumers to gain a sense of familiarity and belonging. The goal in working with this code is to fill in the spaces in a consumer’s mind in a way that makes more sense than the last guy did, drawing them into a business by drawing them into the business’s narrative. Patrick’s work highlights the fact that even brands are communities. In a culture today that prizes authenticity and community, Patrick has seen the primal code broadly and effectively used. He continues to move on to new and exciting projects, such as his current work with IBM, and he even holds Primal live events. Listen to learn how Patrick comments on senses as icons, primal code and its help in acquiring funding, expanding one’s influence as an author, and even the primal code construct applying to veterans returning home. Learn more about Patrick’s book, Primal Branding. Read Steve Brown’s book, The Golden Toilet.Thinking of starting your own podcast? Buzzsprout’s secure and reliable posting allows you to publish podcasts online. It also includes full iTunes support, HTML5 players, show statistics, and WordPress plugins. Get started using this link to receive a $20 Amazon gift card and to help support our show!Support the show (https://cash.app/$stevemfbrown)
Snippet Transcripts

Creating A Community With Your Brand | Patrick Hanlon
33:06-36:31
So it seems like the writers of Game of Thrones, they sat down with your book and as they can each, I don't know if they did that, but I think they knew how to do it all on their own right. And so it's kind of a great exercise. Yeah, that exists there. But yeah, Game of Thrones is one, I throw up there as one of the, it has all the pieces, right? Mhm. So over the years, Patrick has the appreciation for the insights in primal branding as it has. It wasn't like a big splash in the beginning, or is it like even more relevant now, Have you seen a shift in the way that brands are looking at or expectations of marketing? There has been a shift. Yeah. And in the beginning, well, let's go today, when I talk about community, everyone goes, Yeah, So, and I remember standing on stage after stage after stage in 2000 and 12345 whatever, and uh talking about brands, our communities and people thought, I was talking about either talking about church or minorities or movements or something in the neighborhood, my local neighborhood, they did not think of brands as being communities nor do they especially want to create one. And the, but that has changed, you know, and now we kind of take them for granted and people go, what else you have. So there has been that shift and I think that that shift happened through there's a great quote that max plank, the physicist had that I have kind of seized upon and that is that great theories, Scientific theories don't take hold because you finally convinced your peers that it's a great idea. All your peers, old piers die off and the next generation comes up and they go, well, of course, that's the way it is. Just makes so much sense. And so that's kind of where I find myself right now. And the it has had success obviously, but it didn't have immediate success. I wouldn't say although it did have some immediate success, but it was not like it came out the same year as Blue Ocean. The ocean strategies, which was a huge hit criminal has had more of a slow burn. And actually when I spoke with Simon and Schuster about changing the cover last year, they said, well, you have a Champagne problem. And there was static on the line. So I didn't really couldn't hear Champagne. And I said, I'm sorry, I'll get here. Is you have a problem? Static, static, static problem. And I went, I'm sorry. I didn't hear what you're saying. I thought I could just let them keep talking because I thought I'd be able to figure out what the problem was, but I couldn't. And so I said I'm sorry I heard there was a problem. What kind of problem do I have? And they said again you have a champagne problem And then I'm going what the hell is a champagne problem? And she said well you've been able to Do what every writer tries to do. And that is keep the book alive for more than 3-6 months. And I went oh okay I guess I can't afford champagne but I'll go buy some. So yeah it's been more of a slow burn and I'm grateful actually that I think it's better off not being a major hit in the beginning.