All Audio The Tragedy Academy
Episode 83 of 113 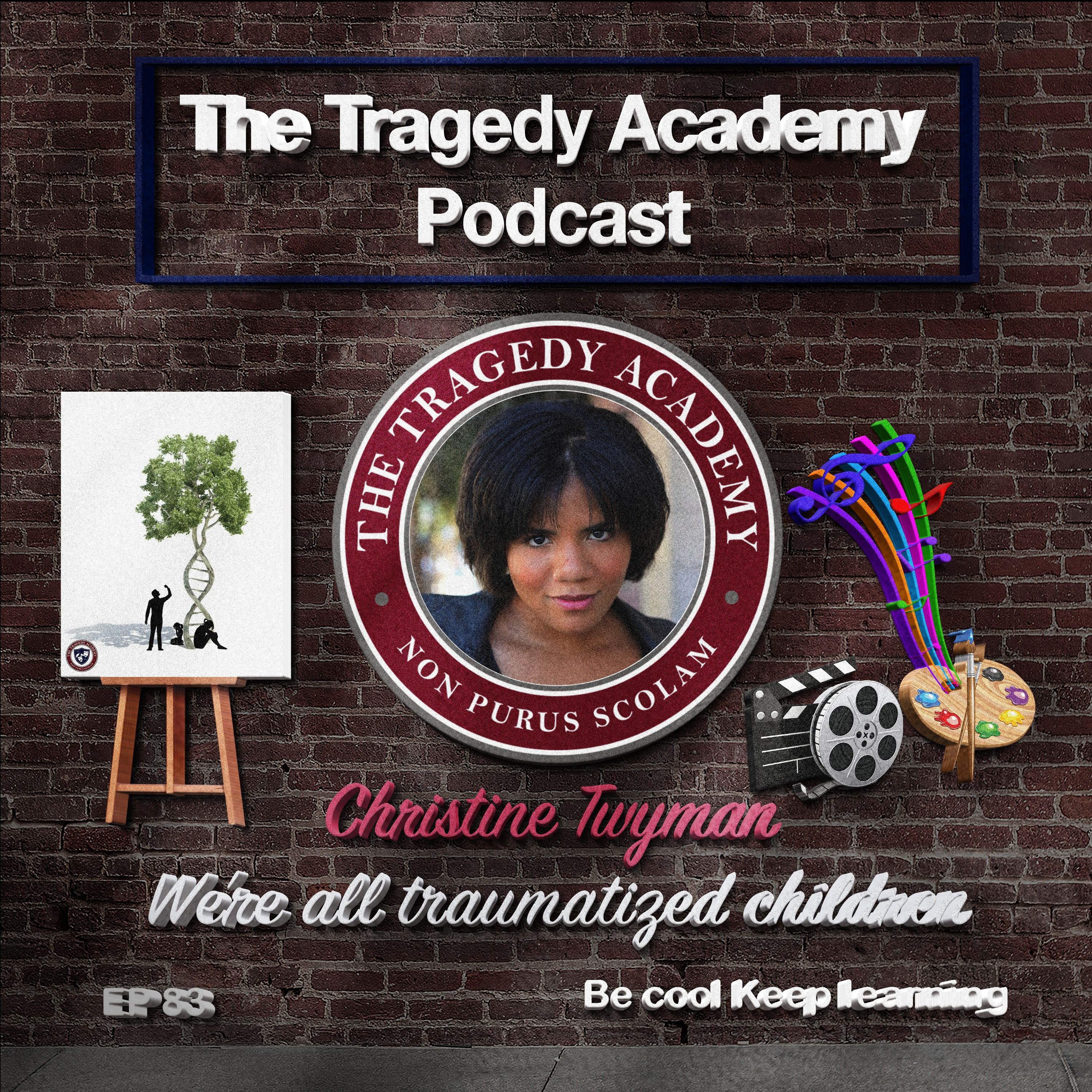 01:04:19
Play Audio
Add to Playlist
Share Report
Summary: In today's episodes of The Tragedy Academy, Jay welcomes actress and director Christine Twyman. Chrissy breaks down the concept of trauma and presents a method of healing by art. Christine advocates that through art, we can create a space for trauma intervention.Key Points: Advocating for t
Category: Comedy
Publish Date: Jun 28, 2021
Tagged in this Audio:
More
Jump to Full Description
Snippets are a new way to share audio!
You can clip a small part of any file to share, add to playlist, and transcribe automatically. Just click the to create your snippet!
Top Snippets - Special Guest - Christine Twyman

There are currently no snippets from Special Guest - Christine Twyman.
Snippets are an easy way to highlight your favorite soundbite from any piece of audio and share with friends, or make a trailer for The Tragedy Academy
Create a Snippet
Found on these Playlists

There are currently no playlists containing this audio.
Add this audio track to one of your playlists
Add to Playlist
Full Description
Back to Top
Summary: In today's episodes of The Tragedy Academy, Jay welcomes actress and director Christine Twyman. Chrissy breaks down the concept of trauma and presents a method of healing by art. Christine advocates that through art, we can create a space for trauma intervention.Key Points: Advocating for trauma intervention via artWorking with people who are only interested in the monetaryUnderstanding traumaIntegrating with your traumaRecognizing that it's not our parent's faultMen are oppressing themselvesEpisode Highlights:[00:00:31] Introduction to Christine Twyman    [00:03:04] Jay introduces Christine's goal of advocating for trauma intervention via art. She describes this as a society, and there are several issues the prevent people from getting trauma intervention, and one way to receive these interventions is through art. Why? Because art is one of the few things that can connect everyone in some way.  [00:06:36] Christine admits filming is a strange medium to create in because it is one of the few spaces where business and politics interject. Unfortunately, it's almost impossible to separate them.[00:08:19] Christine makes it known the intent for someone to make art solely for money does not bother her if only they allow her to do what needs to get done.[00:12:12] Christine and Jay give their interpretation of ego. Where ego is more of a persona and how people perceive things.[00:14:04] Christine portrays that we are all traumatized children and confesses that she has grown more as an actor by understanding other people as she learns about herself while she unpacks her life.[00:17:32] Christine confesses her love for writing, even more than acting. Writing is the most exciting thing to do; it releases parts inside of you didn't even know you had.[00:22:11] Christine brings up the topic of violence in mass manipulation. From a young age, both women and men are conditioned to fall into specific gender roles, and if they dare to venture outside of that, there will be repercussions.[00:24:45] Christine tells us the critical role of past traumas how the goal is not to forget about your past but to make amends with it. It's a matter of integrating, not removing. She also shares the many pieces of herself she's learned from unpacking her mental illness.[00:26:57] Christine recognizes that it's not our parents' fault for how they raised us. The generational gap is normal, and it is our duty to create a better world for future generations by bridging those gaps.  [00:31:19] Christine breaks down the types of violence in life; 1st violence is physical abuse, and 2nd violence is psychological and emotional. People do not usually quantify emotional violence as violence.[00:33:24] Jay details his life growing up in a disenfranchised area of the south, where people blamed their struggles on each other when they should be blaming the system. Christine labels this as crabs in a barrel.[00:36:00] Christine and Jay agree on the notion that men are oppressing themselves. Men learn that they are not allowed to feel what makes them human. Christine states that to oppress the female class, men have to believe that there's something wrong with them at all. [00:39:34] Christine and Jay discuss the animosity we create within ourselves and how to identify microaggressions, referencing White Fragility by Robin DiAngelo.[00:44:05] Jay gives an anecdote when he passed judgment on a friend who just had his tooth chipped.[00:46:20] Christine gives us a quick rundown of commedia dell'arte, aka SNL 1.0.[00:50:30] Christine and Jay agree on art being a part of evolution. It's a tale as old as time; it's something we need. It creates connections and serves as an outlet for the ego.[00:54:47] Christine and Jay reflect angry pieces of art and what it means to make something with which you disagree.  [01:01:44] OutroSources Mentioned:-     White Fragility by Robin DiAngelo Instagram | @outta_my _skin
Up Next
Add to playlist
New playlist