All Audio Comics In Motion 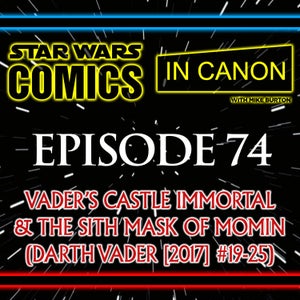 FORTRESS VADER IS UPON US! Yes, the finale of Mike’s favourite Star Wars comics ever (as of recording this) comes to an end with Vader creating his immortal castle on Mustafar with the help of the Sith Momin to try and open up a portal to Padmé all while fighting off native Mustafarians and many oth
Category: Reviews Movie Reviews
Publish Date: Oct 16, 2021
Tagged in this Audio:
More
Jump to Full Description
Snippets are a new way to share audio!
You can clip a small part of any file to share, add to playlist, and transcribe automatically. Just click the to create your snippet!
Snippets: Clips of Star Wars: Comics In Canon - Ep 74: Vader’s Castle Immortal & The Sith Mask Of Momin (Darth Vader [2017] #19-25) that people like

There are currently no playlists containing this audio.
Add this audio track to one of your playlists
Add to Playlist
Up Next
Full Description
Back to Top
FORTRESS VADER IS UPON US! Yes, the finale of Mike’s favourite Star Wars comics ever (as of recording this) comes to an end with Vader creating his immortal castle on Mustafar with the help of the Sith Momin to try and open up a portal to Padmé all while fighting off native Mustafarians and many other hurdles along the way in this exciting finale! In addition, Mike provides information on many other Jedi that appear in this comic, the history of Mustafar and more!
This story is set just approximately 5 years after Revenge Of The Sith (14BBY). The writer for these comics was Charles Soule, Giuseppe Camuncoli was the penciller, Daniele Orlandini was the inker and David Curiel was the colour artist for all issues excluding issue 20. Dono Sanchez-Almara was the co-colour artist on issues 20, 23, 24 & 25 and Erick Arciniega was co-colour artist on issues 20 & 25.
Issue 19 was released August 2018, Issue 25 was released December 2018, the trade paperback collection was released August 2020 and the full omnibus of the 2017 Vader comics is due to be released November 2021.
Mike tackled the first three volumes of 2017 Vader in ep 62, 66 & 70 of SWCIC. For the 2015 Vader run (set after A New Hope), check out episodes 15, 17, 19, 23 & 29 of SWCIC, plus ep 41 features the Vader: Dark Visions anthology mini-series and ep 49 is the Target Vader mini-series.
Charles Soule wrote the High Republic novel Light Of The Jedi as well as the following SW mini-series; Rise Of Kylo Ren (in ep 1 of SWCIC), Obi-Wan & Anakin (ep 11) and Lando (ep 18).
Check out the last episode of SWCIC where Mike embarked on the first volume of the 2020 main Star Wars run, set moments after the end of Empire Strikes Back where Luke searches for his lost lightsaber, so heads back to Cloud City with Leia & R2-D2, plus Lando returns searching for an old friend, all while the group evade the pursuing Empire! Mike goes through the plot & gives plenty of details to other connections including the Pathfinders, Ugnaughts, Weequay and more!
If you want to hear Mike’s thoughts on issue 5 & 25 of this run of Vader comics, then check out the episode of “Desert Island Comics” on the 20th Century Geek podcast here: http://spoti.fi/3r1UOvZ
Mike returned to Star Wars Timeline to talk about The Force Awakens, listen here: https://youtu.be/c4VMXeBU3W4
Mike & Megan spoke with Alex & Mollie of Star Wars Explained, you can listen on this very feed or check out the video version on YouTube here: https://youtu.be/R2fr4-TdbQA
Mike along with 5 other members of Comics In Motion discussed Art Spiegelman's Maus in the 2nd CiM Book Club: https://bit.ly/BC2Maus
Check out Mike’s Patreon, where he releases 1 or 2 episodes of his “Afterthoughts” a week, plus unsplit full-length episodes of GCC, additional photos (including early access to photos of comics) & more, so if you want to support the show and get more content, check out http://patreon.com/genuinechitchat
Mike is also the host of a podcast called Genuine Chit-Chat where he speaks with a different guest each week about a wide array of topics where no subject is off limits - listen wherever you're listening to this show!
Find Mike @GenuineChitChat on Twitter, @Genuine_ChitChat on Instagram & /GenuineChitChat on Facebook!
Intro & outro by BZ The Voice: http://www.bzthevoice.com/
Intro arranged by Mike Burton, backing music by Eric Matyas at www.soundimage.org