Straight Shootin' View: Football should be affordable, you can't beat a live experience.

From Audio: The Straight Shootin view Episode 10 - Are fans being priced out by clubs? 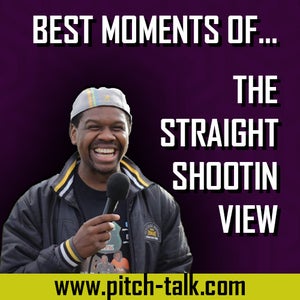 Best moments of the Straight Shootin' View
43:30 7/2/21 11 audios
Up Next
Full Description
Back to Top
Taken from Episode 10

Straight Shootin' LJA discusses The Football Supporters Federation (FSF) asking that clubs make going to football matches more affordable for away fans. SSLJA gives his view on the topic and also looks briefly at why more people are choosing to illegally stream matches, including the 3pm blackout rule.
Transcripts
Back to Top
one thing that really kind of concerns me is ticket prices, ticket prices concerns a lot of people, the Football supporters Federation FSF do a lot of great work around this to be perfectly honest. And it's very viewpoint that I'd like to, that I'd like to discuss on the straight shooting view today, where it's like they said on december 20th 2017, um, they actually said, hey, clubs should make football matches more affordable and you know what, I'm with them on that. I'm with them on that because you look at, you got the whole thing with people watching illegal illegal streams of matches, like with the code fully loaded Cody boxes and all that kind of stuff. It's a case of you got to look at the root cause as to why people are doing that and one of the major causes the three PM blackout rule is still a very, very interesting point because if they get rid of that, our match attendance is gonna drop. I would personally say, no. I've described actually discussed this with a friend of mine as well. It's like, I don't think I don't think it's tendencies will drop maybe in the short term now. I still don't even think that because at the end of the day, you can't be a live experience, just like live music. You can't be a live experience. I mean from from some work that I've done professionally as a video and it's a case of you just can't beat live music. You can't be the spontaneity, the sound of it, seeing a band on stage, putting in putting in the effort, seeing the rehearsals. I didn't see it come to fruition. So it's kind of like with football, I would see as Yeah, it is one of them ones where you just can't beat, go into a match life. I mean, some of them, someone imagines that I've been to live um England v. Ghana even as a friendly, that was pretty damn good. Going to the 2015 Women's F. A. Cup final. The live experience was amazing. I actually watched the whole match back afterwards and it was all no one where it was like it was cool to be there. It was cool to be their life. Like when we did that, when we do our final videos on Wembley Way, meeting you guys, the fans, there's nothing like that. You can't beat that live experience. You can't beat that live energy. Even when we used to do the pit stop live shows. Big shout out to the guys who used to be regular Skype hours. And it's one that was we say you can't beat that live experience. But in these times where financially it's hard for people. Some of, some of the quotes, some of the quotes from the football supporters federation, in terms of their research, I mean, what's it? Football fans will spend an average of £171.37 to see their team in away games. And that was during, that was during christmas 2017. That those estimates that those estimates were made and it's like wow, ticket travel and food costs between the 26th of december 2017 and january 4th 2018 were taken into account by the study. Now it is one of them was also estimates that the away supporters will travel 360 miles to see their team played during the festive period. And it's a case of yeah, away fans, any fans, to be honest, shouldn't should not be taken for granted. And one the one the quotes actually, kevin Miles, the FSS chief executive, I said the way fans should not be taken for granted clubs and sponsors can and should do more to make football as affordable as possible. Now it is one them ones where the BBC's price of football study was quite an interesting one because it revealed that 82% of 18 to 24 year olds from 1000 respondents see the cost of tickets as an obstacle to going to more football matches. So essentially it is one of the other ones where money is ruling the game. It really is. I mean,
Up Next
Popular Playlists
Best Yoga Podcasts: Listen & Learn New Poses Sour Shoe's Greatest Moments on The Howard Stern Show Listen to: Top 15 Funniest Barack Obama Quotes 9 Game Design Podcasts Every Game Designer Needs to Hear 7 Podcast Episodes About The Golden State Killer That Will Keep You Up at Night David Parker Ray & Shocking Audio of the Toy Box Killer You Need to Hear Best UFO Podcasts That Will Abduct Your Mind Controversial Joe Rogan Experience Episodes Audio Wack Packer Beetlejuice Best Moments on The Howard Stern Show Best NoSleep Podcast Episodes To Terrify You Sexy ASMR Audio to Turn You On
Popular Categories
ASMR Business & Tech Cannabis Fashion & Beauty Gaming History Home & Garden Kids & Family Spirituality Travel
Add to playlist
New playlist