Teenagers: Hoodlums, Malcontents, And The Disappointed - 1959 - Past Daily Pop Chronicles

From Audio: Teenagers: Hoodlums, Malcontents, And The Disappointed - 1959 - Past Daily Pop Chronicles 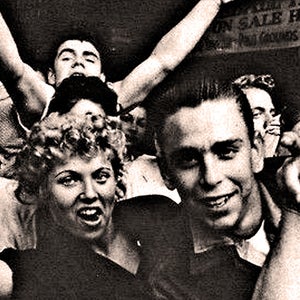 02:44
Play Audio
Add to Playlist
Share Report
Teenagers in the era of Cold War, space and potential annihillation. A period of time to which there was an entire library of books, studies and treatises dedicated. That generation which came just prior to the Baby Boomers and just at the beginnings of. That generation which were part of the Americ
Category: Society & Culture
Publish Date: Jul 08, 2021
Snipped By:
Share
station description Past Daily: News, History, Music And An Enormous Sound Archive.

Past Daily: Amazing Historical Concerts & News
Tagged in this Audio:
More
Jump to Full Description Transcript
Found on these Playlists

There are currently no playlists containing this audio.
Add this audio track to one of your playlists
Add to Playlist
Full Description
Back to Top
Teenagers in the era of Cold War, space and potential annihillation. A period of time to which there was an entire library of books, studies and treatises dedicated. That generation which came just prior to the Baby Boomers and just at the beginnings of. That generation which were part of the American Dream and embodiment of the American nightmare, all in one combustible package. This was the Youth of America which became the standard-bearers for the Misunderstood, the Disenfranchised, the Disappointed; the ones who acted out on the fears of “any-day-now” doom and obliteration from nuclear war – the dawn of wretched excess, of endless movies and magazine articles on neglected teenagers/over-coddled teenagers, broken homes, Momism (yes, there was a segment of society which blamed all the ills of youth on the mothers of the world), the rise of mental illness, the dawn of the age of introspection, self-entitlement and just plain old hate for everything and everyone in charge. We hadn’t really had it quite this way before. We had previous generations which were actively engaged in social rebellion. But it was regarded by many as a rite of passage and that “they’d eventually grow out of it” school of “sowing wild oats”. Not this bunch – they were growing and they were angry and they were getting tired of the status quo. This episode of the Sunday Chat program The Open Mind, first broadcast on May 21, 1959 discusses the issue of teenagers and delinquency in the world of 1959; it’s perceived causes, it’s assumed roots and it’s possible cures. What’s interesting, is to parallel this with radio documentaries and discussions of the late 60s, where the issue grew from “violent, malcontent teenagers” to “drug-addled, anti-establishment hippies”. Same fears, same scratching of heads. Look at the photo at the top of this page – see those kids? Think about it – they are your older brothers and sisters, parents and grandparents. They represent youth as its always been – eager for change and impatient for it. Just like now – just like next week – just like forever. But to get an idea of what sort of issues the elders of 1959 were dealing with, here is that episode of The Open Mind, as it was broadcast on May 21, 1959. A reminder that, for better or worse, we have always been just a little screwed up. And, for better or worse, we’ve survived.
Transcripts
Back to Top
I think we've all read a great deal about it in the recent years and I think all of us are very much puzzled by the different causes to which juvenile delinquency has been attributed. We've heard about bad family life, we've heard about broken homes and lack of playgrounds and slum conditions. We've heard about the psycho dynamics of juvenile delinquency and I think it's probably a good time now to begin to discuss in depth the causes in the meaning of the definitions of juvenile delinquency. My three guests today are particularly well qualified to do this and I think I ought to introduce them to you right now. My first guest is dr Alfred Kahn, who is professor of social work at the new york school of Social work at Columbia University, consultant to the Citizens Committee for Children of New york city. My second guest is Judge Mary C. Cooler, formerly of the juvenile division of Superior Court of san Francisco. Judge Kohler was consultant on family and Children's courts to new york's Distinguished tweet commission and my third guest is dr William seek of our associates of boston University, director of the National Education Association's Project on juvenile Delinquency, which project has just published delinquent behavior culture and the individual Doctor Garcia's, I think that we ought to indicate that this new volume delinquent behavior, culture and the individual is sort of the starting off point of today's program. In this volume, you and your colleagues say that the working mother myth, the notion that juvenile delinquency is caused at least in part by working mothers, is not to be considered as important as we have in the past. That the broken home idea is in part also a myth that mental retardation as a cause of juvenile delinquency is again a myth that the absence of playgrounds under the notion of give the boy a place to play and he won't get into trouble is also a myth. But bad companions and evil gang leadership. Another myth, physical attributes and heredity a myth. Because you say contrary to many opinions, delinquents are as healthy if not healthier than the non delinquent contemporaries. You also go on to take the two pieces, the notion that deteriorated neighborhood and slums cause idle hands cause and so forth and so on. And I wonder with the destruction in your report of so many myths, what you would consider what you and your colleagues have considered to be the cause is because I know that the volume has stimulated a great deal of discussion and controversy. I believe we've not only said, we haven't just said that their myths, but I think we indicated that there were some half truths and over generalizations. So there may be a bit of truth in some of these, although the direct relationships might be questioned. Uh, as far as our report is concerned, we make a number of points and perhaps to start with.
Up Next
Add to playlist
New playlist