All Audio Much Talk About Nothing: A Show About Movies, Music, and More! 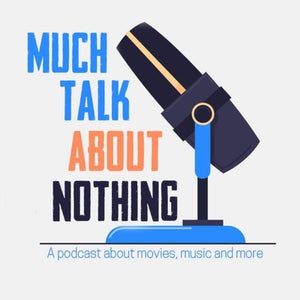 The All-New, All-Different Much Talk About Nothing!

Much Talk About Nothing: A Show About Movies, Music, and More!
Duration: 01:22:29
Play Audio
Add to Playlist
Share Report

After feeling the need for a change of direction, Grant and Grant talk about the new show format. (Spoiler warning, it's segments.) They then launch into a deep conversation about the facts and rumors surrounding the Gabby Petito case. Then, in Sports News, they talk about Jon Gruden, the MLB playof
Category: Reviews Movie Reviews
Publish Date: Oct 15, 2021
Tagged in this Audio:
More
Jump to Full Description
Snippets are a new way to share audio!
You can clip a small part of any file to share, add to playlist, and transcribe automatically. Just click the to create your snippet!
Snippets: Clips of The All-New, All-Different Much Talk About Nothing! that people like

There are currently no playlists containing this audio.
Add this audio track to one of your playlists
Add to Playlist
Up Next
Full Description
Back to Top
After feeling the need for a change of direction, Grant and Grant talk about the new show format. (Spoiler warning, it's segments.) They then launch into a deep conversation about the facts and rumors surrounding the Gabby Petito case. Then, in Sports News, they talk about Jon Gruden, the MLB playoffs situation, and finally the NFL and college football. In Tech Corner, they talk about the Playstation 5, Back 4 Blood, and going hands on with Windows 11. Finally, Grant Ingram has a message for World Mental Health Day, and we ask for your feedback.
Check out our Website!
Follow us on Instagram and Twitter, and send us a message!
Join the Much Talk Municipality Discord!
If you want to be a part of the show send us an email at MuchTalkAboutNothing@gmail.com!


Show Notes:
SO... ABOUT THAT (6:25):
The Gabby Petito Case:
The Gabby Petito case has polarized the country ever since it became national news. On August 19th, 2021, the first vlog made by Gabby and her fiancé, Brian Laundrie, was posted on the YouTube channel “Nomadic Statik.” Unknown to Gabby and maybe her fiancé, this would not only be the first video posted on the channel, but unfortunately, the last. On September 1st, 2021, Brian returned to his parents home in North Port, Florida, where he and Gabby had been living, driving their van but curiously without Gabby. On September 11th, 2021, Gabby’s family reported her as a missing person after not hearing from her since late August. Her body was found near Grand Teton National Park in Wyoming on September 19th, 2021. Since then, there has been a lot of information released and we have put together a timeline of events.
The article we referred to about the Petito case!
SPORTS NEWS (29:53):
The Jon Gruden Emails:
Jon Gruden has resigned as the head coach of the Las Vegas Raiders. He was in the 4th year of a 10 year contract worth a reported $100 million. His resignation comes after emails were leaked that were sent between him and the former Washington Redskins, now the Washington Football Team, general manager Bruce Allen, as part of the investigation into misconduct inside of the then Washington Redskins. These emails were sent between 2011 and 2018 during Gruden’s time at ESPN as a broadcaster for Monday Night Football before his return to coaching in 2018. What was in those emails? Listen and find out.

If you would please leave a review, it really helps us out and we always read them on the show!
Thank you so much for listening, and we will be back next week!

Send in a voice message: https://anchor.fm/mtan/message
Up Next
Add to playlist
New playlist