Your changes have been saved
All Audio The Broken Shelf 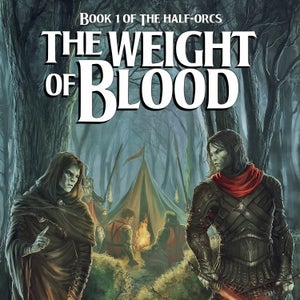 The Broken Shelf 198: The Weight of Blood

It was a promise made long ago by the two friends that they would revisit the work of David Dalglish. Danny may have been overcritical when reviewing Dalglish's work "The Shadowdance" franchise, b
Category: Educational
Publish Date: Oct 12, 2021
Tagged in this Audio:
More
Jump to Full Description
Snippets are a new way to share audio!
You can clip a small part of any file to share, add to playlist, and transcribe automatically. Just click the to create your snippet!
Snippets: Clips of The Broken Shelf 198: The Weight of Blood that people like

There are currently no playlists containing this audio.
Add this audio track to one of your playlists
Add to Playlist
Up Next
Full Description
Back to Top
[Warning] This episode contains explicit language and explicit themes. Listener discretion is advised.

It was a promise made long ago by the two friends that they would revisit the work of David Dalglish. Danny may have been overcritical when reviewing Dalglish's work "The Shadowdance" franchise, but there was still something there inspiring to the young critic and Danny wanted Allen to join him as he tracked down Dalglish's first works. The day of destiny is here and this time both of the duo read the book. Together the cover what the first book in Dalglish's library holds and what it does really well as a first novel and some of the intricacies left over that Danny saw in "Shadowdance." They cover the plot and the the major characters, as well as the phenomenal sense of brutality and combat. As The Broken Shelf draws closer to its end, what better way to judge where Danny and Allen have come then by looking over a challenging work an seeing how an author improved.

This podcast is fair use under U.S. copyright law because it is (1) transformative in nature, the audio is a journalistic commentary on popular media (2) uses no more of the original work than necessary for the podcast's purpose, the claimed duration is an edited clip for rhetoric, and (3) does not compete with the original work and could have no negative affect on its market.

DISCLAIMER: I do not own any of the materials (music/artworks). All rights belong to the original artists.
If you are the content owner and want to remove it, please contact me at legionssoulfood@gmail.com. Thank you!

Hey! At the time of publishing episode eighty of The Broken Shelf, the podcast became available on TuneIn, Stitcher, Google Play, and iTunes. That said, if you downloaded the podcast via anything else other than Sound Cloud, maybe check out our Sound Cloud, give us a follow, and listen to a few more of our other tracks. Sound Cloud was there from the beginning for us and no matter what the others provide it was and is our host. Thanks!