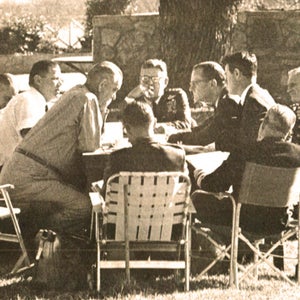 From Audio: The Cost Of War - Senator John Stennis And The Defense Budget For Vietnam In 1965 - Past Daily Reference Room

Start Time: 00:00 End Time: 02:50
Sen. John Stennis – Meet The Press – Aug. 1, 1965 With our involvement in Vietnam amping up by the day in 1965, concerns over just how much this excursion into the abyss was going to cost began to surface. When President Johnson announced the Military budget ceiling to fight the war in Vietnam was
Category: News & Politics
Publish Date: Aug 12, 2021
Snipped By:
Share
station description Past Daily: News, History, Music And An Enormous Sound Archive.

Past Daily: Amazing Historical Concerts & News
Tagged in this Audio:
More
Jump to Full Description Transcript
Playlists that The Cost Of War - Senator John Stennis And The Defense Budget For Vietnam In 1965 - Past Daily Reference Room appears on.
Share

Past Daily: Conflict's Greatest Hits
03:56:24 11/2/20 59 audios
Up Next
Full Description
Back to Top
Sen. John Stennis – Meet The Press – Aug. 1, 1965 With our involvement in Vietnam amping up by the day in 1965, concerns over just how much this excursion into the abyss was going to cost began to surface. When President Johnson announced the Military budget ceiling to fight the war in Vietnam was to be $100 Billion dollars, questions arose as to whether this was enough, too much – just what was this buying? Handed the job of explaining the cost was Senator John Stennis (D-Miss.) who was acting Chairman of the Senate Armed Services Committee, Chairman of the Senate Preparedness Committee and acting Chairman of the Senate Defense Appropriations Committee. Here is an interview from Meet The Press with Senator John Stennis, broadcast on August 1, 1965. Another piece of the puzzle.
Transcripts
Back to Top
Monitor. Now invite you to meet the press. America's press conference of the air. Winner of every major reward in its field. Today's guest on meet the press will be Senator john Stennis, democrat of Mississippi who is acting chairman of the Senate Armed services committee and chairman of its preparedness committee. Senator Stennis is also acting chairman of the Senate defense appropriations committee which is scheduled to hear testimony on Vietnam this week from Secretary of Defense McNamara. We'll bring you today's program in a moment. This is frank blair. Your sunday night monitor host war is never pleasant, but the way the north Vietnam communist guerrillas play the game, it can be terrifying to say the least. We get that story from Mr Leo churn that the Vietcong exact total terror from any village they assault in dance. Why they left half the town mutilated or dead. The remaining half the Vietcong before they withdrew from dance. Y literally visited every tiny shack, every little home, every hut took every last kernel of rice. Every single penny or P. S. That was left in fact took any movable that could conceivably be of value to them before they withdrew back into the jungle surrounding dunks. Y 10,000 Hamlet chiefs have been assassinated. A kidnapped within the last three years. Not a very cheerful story for a sunday night monitor, but we do try to get the facts. Join us this sunday on NBC radio. Did you know that smokey bear has helped prevent more than a million forest fires since 1942. Now that's a great record. But Smokey still need your help. Nine out of 10 forest fires are caused by carelessness, so always follow smokies rules hold all matches too cold, crush all smokes dead out and drown that campfire, stir the ashes and drown it again. Remember only you can prevent forest fires and now meet the press. Today's guest Senator john Stennis democrat of Mississippi, who was recently described by the Washington post as the most powerful single congressional voice on matters of defense. Our panel consists of Mrs May craig of the Portland Maine press herald, peter lisogor of the Chicago Daily News warren Rogers of the hearst newspapers and Peter Hackett's NBC News Lawrence Spivak is our moderator. Our guest today on meet the press is Senator john Stennis of Mississippi, Chairman of the preparedness investigating subcommittee, whose job is to act as
Up Next
Add to playlist
New playlist