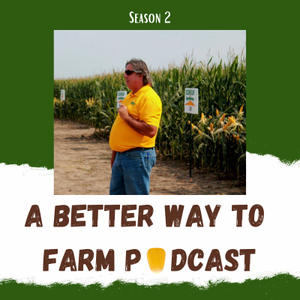 The Groundhog Year Could Be Ahead of You This Season, What Are Your Chances? Ep68

We are so excited to share with you today another bonus episode of farm and life hacks for all our dedicated listeners over time. The A Better Way to Farm family has always aimed to find better ways to support our co-farmers and owners even through good and bad times, not only in farm productions bu
Category: Agriculture
Publish Date: Sep 29, 2021
Tagged in this Audio:
More
Jump to Full Description
Snippets are a new way to share audio!
You can clip a small part of any file to share, add to playlist, and transcribe automatically. Just click the to create your snippet!
Snippets: Clips of The Groundhog Year Could Be Ahead of You This Season, What Are Your Chances? Ep68 that people like

There are currently no playlists containing this audio.
Add this audio track to one of your playlists
Add to Playlist
Up Next
Full Description
Back to Top
We are so excited to share with you today another bonus episode of farm and life hacks for all our dedicated listeners over time. The A Better Way to Farm family has always aimed to find better ways to support our co-farmers and owners even through good and bad times, not only in farm productions but also in concrete and viable life tips and some insights.   So if you do like what you hear in this podcast, go ahead and share us with a friend and fellow farmers. Rate us in ITunes or other platforms you’re in, so we could better spread the good stuff around. We are so appreciative for you all tuning in.   Now, have you heard or watched the movie, “Groundhog Day”? If yes, let us exchange a few ideas after and if not, be ready to listen and learn a thing or two from the movie that we can all apply in life and in our farms. Let’s go right in and gain better ways to make our farm management skills better each season… 😉 😉 😉     Episode 68 Transcripts   [00:00:16] Rod: Hey guys, Rod here at A Better Way to Farm. Happy Monday afternoon, what a beautiful day! Blue skies above, a bean field. Thinking about starting to turn across the road. About 78 degrees with a beautiful seven or eight mile an hour breeze. I hope your day is going well. I hope this day finds you doing great. Wanted to talk to you today. This is a concept that Karen came up with. I think it was, stole the title from a movie.   [00:00:42] How many of you out there seeing the movie Groundhog's day? For those of you that haven't, just the short synopsis is that this news reporter from the city goes to Punxsutawney to be there for the event of Groundhog's day. When they see if they're going to have six more weeks of winter or not, whether or not based on whether or not he sees his shadow. While he's there, this person who's very much self-centred and self-absorbed kind of lives in his own little world gets trapped and he just wakes up every morning and the exact same thing happens. Every morning, the alarm clock goes off. Every morning, the alarm is, the radio is playing "I got you, babe", by Sonny and Cher. It's the same thing over and over and over. And so that got Karen thinking and got me thinking about how many of us are living groundhogs a year instead of Groundhog's day? How many of us are going out here year after year, and we're doing exactly the same thing? Or we may try one thing because somebody is running some really good ads on it. There's some products right now being advertised very heavily. And guys, I want to encourage you before you take a look at our stuff. Before you take a look at anybody's stuff, I will strongly encourage you. Talk to people who have used it. Not people who are selling them, but people who have used it. I'd also invite you to get into the Bex PFR book and say, all right, I'm thinking about using this product. Whatever it is, super-duper juice product. And I see the company literature looks good, but the Beck's, on the Beck's data, it doesn't even pay for itself. That's some of the typically the only changes we make, is whatever, whoever bought the most advertising. But guys, what I want to encourage you to do is not live in Groundhog's year. I would encourage you that if we do the same thing again and again, and again, to a very large degree, we're going to get the exact same results. And maybe the worst part is if we do the exact same thing again and again, and again, we're actually going backwards because we might be doing something that doesn't build soil health, and we've got to talk about going to rehab, taking our soil to rehab.   [00:02:52] Sometimes, we're doing the wrong thing. We do it again and again, and again. And all of a sudden, we have less drought tolerance and we can't even take as much heat at as much dry weather as we could five years ago. So maybe worse than the exact same thing is it's going backwards on us. What I want to talk about is every year trying something different. Now in the movie, even though it's very funny and the premises that he stuck every day, he does something different every day. He does something different just to see how it's going to turn out. One day he drove a car off of a cliff, but of course, because it was Groundhog's day, he didn't die. He wakes up the next morning, Sonny and Cher singing, "I got you, babe". You know, one day he sticks a fork, I don't know if it's the toaster into the bathtub with him, but he wakes up the next day and they're singing, "I got you, babe".   [00:03:37] How many of us are trying something different? And sometimes we need to put a fork in the toaster. Sometimes we need to drive the car off the cliff. Sometimes we need to test something. For instance, one of the easiest things to test is mess with your population on soybeans. Guys, I have a ton of people who are getting back to me and they, they've went from 185. I've got several g
Up Next
Add to playlist
New playlist