Your changes have been saved
All Audio To L And Back: An L Word Podcast

To L And Back: An L Word Podcast
Duration: 03:49
Play Audio
Add to Playlist
Share Report

Start Time: 03:19 End Time: 07:08
*SPOILER ALERT* This is the final episode of "To L and Back", a recap podcast of the lesbian show we love to hate and hate to love, "The L Word". Riese and Carly watch and recap every single episode and have finally reached the finale. So make sure to go all the way back and rewatch with them!
Category: LGBTQ TV
Publish Date: Jun 02, 2021
Snipped By:
Share 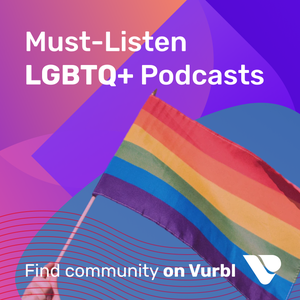 Must-Listen LGBTQ+ Podcasts
01:14:26 2/1/21 13 audios
Up Next
Full Description
Back to Top
*SPOILER ALERT* This is the final episode of "To L and Back", a recap podcast of the lesbian show we love to hate and hate to love, "The L Word". Riese and Carly watch and recap every single episode and have finally reached the finale. So make sure to go all the way back and rewatch with them!
Transcripts
Back to Top
well, Greece, it's time this time, let me guess. You know, you give the information, you know, at the start of who directed and wrote the episode, right. Do you want to guess? I'm gonna get, I'm gonna take a guess. Okay. Was it Eileen shaken for both? Ding, Ding, Ding, Ding, Ding, you are correct. Alien shaken. Both wrote and directed. The series finale of the L word episode 608 entitled Last Word. Now, last week's episode, if you recall was entitled Last couple standing. So they're kind of reusing the word last here in the title. But I guess we'll let it slide because it is the last episode. I think they should have called it. Last episode. That would have been really funny. That would have been really, really funny. But then it wasn't, that's true. um this originally aired March eight, which was also the day that Otto straddle articles, birthday jenny died. Auto throttle emerged from like a phoenix, like a phoenix out of the Yeah. And it's like, hey guys, We have four posts on our website camera to come Right. All four of them. Read them again. Yeah. Well, I mean technically like I had my l a bird recap box was also called Otto straddle. It was called the road best straddled. But it was just my little thing and then it became a big thing. It's a huge, they don't have heard of it. Yeah. Now it's a very huge thing. I can't get out of it. You're stuck with it forever. Um Okay, let's begin again. I just want to point out that the previously is for this are very banana Oculus, completely bananas over the plate. Tell us the entire history of Alice, Tasha, Jamie, then gallon, Helena, then jenny, film, negative, molly, jenny, Shane's jacket, then max tom and the baby, then kelly, then bet, then nonsense. Then Marcy and new york city. It's all here. This Episode has everything. This New York's hottest part is the last word, episode 608. It's got everything. It's got lucy lawless, it's got murder. It's got a baby, it's got a drag queen. It's kinda lonely dog. The lovely dog. Glad to see the dog back. It's kind of movie star hiding in the bushes which is always where movie stars were hiding. That's everyone. Uh pregnant man grilling burgers in his backyard. Yes, yes, it does. The thing about this evidence that actually had very little Oh yeah, no, it had very very little. It had to tie up a lot of loose ends and try them up poorly. Like many of them weren't tied up. Actually not argue. None of the loose ends of the series, none of them. In fact, this episode is nonstop loose ends. We've already talked about this, the worst episode ever on television, but we are thrilled to be discussing it today because obviously we have a lot of feedback. We have some notes, we have some notes, I have many notes. Also, this episode is extra long, so we have even notes than we would normally have and quite unnecessarily. So, um and it's not just that, this is bad, it's that literally nothing. And we're always like, that doesn't make sense. That doesn't make sense. This does not make sense. Nothing. Not one minute of this checks out in the world of the show, in the world of time, in the world of like the world, like there's nothing about this that makes sense. And it's also clear throughout that, as we know, the writer of the episode did not know who killed jenny and did not decide that when they wrote the story. And that's actually, you can't do that when you're writing a mystery story, even if you don't reveal the winner or the winner, the winner, the winner, you don't kill jenny, you don't build a killer. You, as the writer do have to know who the killer is.
Up Next
Popular Playlists
Best Yoga Podcasts: Listen & Learn New Poses Sour Shoe's Greatest Moments on The Howard Stern Show Listen to: Top 15 Funniest Barack Obama Quotes 9 Game Design Podcasts Every Game Designer Needs to Hear 7 Podcast Episodes About The Golden State Killer That Will Keep You Up at Night David Parker Ray & Shocking Audio of the Toy Box Killer You Need to Hear Podcasts About UFO & Aliens That Will Abduct Your Mind Audio Cheat Sheet To The Sexy Liberal Podcast Network Controversial Joe Rogan Experience Episodes Audio Wack Packer Beetlejuice Best Moments on The Howard Stern Show 12 Best Episodes of the NoSleep Podcast to Keep You Up at Night
Popular Categories
ASMR Business & Tech Cannabis Fashion & Beauty Gaming History Home & Garden Kids & Family Spirituality Travel
Add to playlist
New playlist