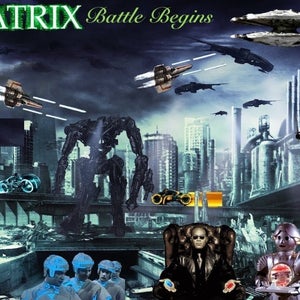 The Matrix Battle Begins, Who Will Win Between Tron, Battlestar Galactica, Terminator, Buck Rogers & Neo from The Matrix?

Topics for today!
topic 1: what are the different Matrix out there.
Topic 2: The top 50 worst movies of all time. (Is this a joke or real? lets look at the list)

Storyline-Tron
Category: Paranormal
Publish Date: Aug 21, 2020
Tagged in this Audio:
More
Jump to Full Description
Snippets are a new way to share audio!
You can clip a small part of any file to share, add to playlist, and transcribe automatically. Just click the to create your snippet!
Snippets: Clips of The Matrix Battle Begins that people like

There are currently no playlists containing this audio.
Add this audio track to one of your playlists
Add to Playlist
Up Next
Full Description
Back to Top
The Matrix Battle Begins, Who Will Win Between Tron, Battlestar Galactica, Terminator, Buck Rogers & Neo from The Matrix?

Topics for today!
topic 1: what are the different Matrix out there.
Topic 2: The top 50 worst movies of all time. (Is this a joke or real? lets look at the list)

Storyline-Tron (1982)
Hacker/arcade owner Kevin Flynn is digitally broken down into a data stream by a villainous software pirate known as Master Control and reconstituted into the internal, 3-D graphical world of computers. It is there, in the ultimate blazingly colorful, geometrically intense landscapes of cyberspace, that Flynn joins forces with Tron to outmaneuver the Master Control Program that holds them captive in the equivalent of a gigantic, infinitely challenging computer game.

Storyline-Terminator (1984)
Sent back from a dystopian 2029--where the cold machines have conquered the entire world--to 1984 Los Angeles, the indestructible cyborg-assassin known as the "Terminator" commences his deadly mission to kill humankind's most important woman: the unsuspecting, Sarah Connor. However, from the same war-torn post-apocalyptic future comes a battle-scarred defender--Kyle Reese, a brave soldier of the human Resistance Army--bent on stopping the cybernetic killer from eliminating the world's last hope. But, the Terminator has no feelings, he doesn't sleep, and above all, he won't stop until he carries out his grim task. Does our future lie in our past?

Storyline-Battlestar Galactica (1978)
The leaders of the Twelve Colonies of Mankind are making plans to sign a peace treaty with their mortal enemies, the Cylon Empire. On the eve of the ceremony, the Cylons betray the pact and destroy most of the Colonies and their entire fleet. Under the command of Commander Adama, the battlestar Galactica leads the remaining Colonial ships into space and seeks out a lost thirteenth colony, which turns out to be Earth. Along the way, the Colonials encounter various races (both friendly and hostile), the legendary human warrior Commander Cain, and the planet Kobol, the motherworld of all the Colonies. All the while, the Cylons - under the command of human traitor Count Baltar - closely pursue this fugitive fleet across the universe.

Storyline-Buck Rogers (1979)
In 1987, NASA astronaut William "Buck" Rogers is caught in a freak accident in deep space, causing his space shuttle Ranger 3 to be blown into an orbit that returns him to Earth - over 500 years later. The combination of gases that freezes him comes close to the formula commonly used in the 25th century for preservation, and his rescuers are able to revive him. In 2491, when Buck awakens from the freezing, Earth is recovering from a nuclear war and is coming under hostile attack by the Draconian Empire. In the second season, Buck has been assigned aboard the Searcher, a starship exploring the unknown reaches of space while searching for former Earth colonies that are scattered across the galaxy.

Storyline-The Matrix (1999)
Thomas A. Anderson is a man living two lives. By day he is an average computer programmer and by night a hacker known as Neo. Neo has always questioned his reality, but the truth is far beyond his imagination. Neo finds himself targeted by the police when he is contacted by Morpheus, a legendary computer hacker branded a terrorist by the government. As a rebel against the machines, Neo must confront the agents: super-powerful computer programs devoted to stopping Neo and the entire human rebellion.

Song Tail-Lights created & performed by Flat Accord Music: https://www.youtube.com/channel/UC8_d16xB_rhRCDDWOOheN_w
Up Next
Add to playlist
New playlist