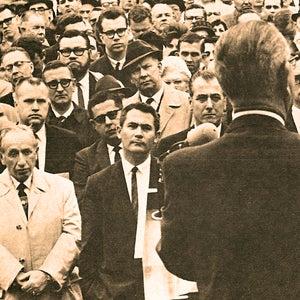 The Press And The Media: Keeping America Informed In 1961 – Past Daily Reference Room. Click on the snippet for a sample.

From Audio: The Press And The Media: Keeping America Informed In 1961 – Past Daily Reference Room

Start Time: 00:02 End Time: 03:52
The Press and Media in America – even in 1961 there were grave doubts the technological advances we had promoted for so long were actually doing their promised job. Many felt Media, particularly the Press, weren’t fulfilling any kind of potential. That the business of information was being usurped b
Category: News & Politics
Publish Date: May 04, 2021
Snipped By:
Share
station description Past Daily: News, History, Music And An Enormous Sound Archive.

Past Daily: Amazing Historical Concerts & News
Tagged in this Audio:
More
Jump to Full Description Transcript
Playlists that The Press And The Media: Keeping America Informed In 1961 – Past Daily Reference Room. Click on the snippet for a sample. appears on.
Share

Past Daily: News Junkies
05:49:19 11/2/20 82 audios
Up Next
Full Description
Back to Top
The Press and Media in America – even in 1961 there were grave doubts the technological advances we had promoted for so long were actually doing their promised job. Many felt Media, particularly the Press, weren’t fulfilling any kind of potential. That the business of information was being usurped by the need to entertain, and that networks were busily seeking the lowest common denominator in order to appeal to the mass, rather than a perceived elite. And that real information, those issues which helped guide a society were being abandoned in favor of large scale distraction.

In January 1961 (the time of this broadcast) we were on the verge of having a new Presidency; the Kennedy years were days away from beginning. In spite of the optimism of a new President, a young President, we had long smoldering issues coming to the boil. We had the Cold War, in danger of erupting into a hot one with Berlin as the flash point. We had the Civil Rights Movement which was gaining traction as well as resistance. We had The Middle East which was always in danger of igniting. We had grumblings from Southeast Asia. We had Cuba and an uncertain story evolving there. There was a lot to make America nervous.

In this episode of At Random, a program hosted by Irv Kupcinet, a distinguished panel of broadcast journalists is assembled to discuss the situation; all of them from CBS. Among them, Daniel Schorr, Alexander McKendrick, Peter Kalischer and Edward R. Murrow. The issue is whether or not Broadcast Journalism is doing its job, not only on TV but radio as well as print. It’s interesting to consider that in 1961 news and Americas right to be informed was taking a backseat for Americas need to be distracted, at least as the Networks saw it. News divisions saw a desperate need – educators saw an opportunity abandoned – executives saw ad dollars going after the biggest audience and ratings. In 1961 concern on the parts of many was the issue of The Public Interest – was it being served.

Sixty years later the atmosphere has changed completely – the avenues of information have evolved in ways never imagined in 1961. But the problem remains the same – are we getting useful information, or is it still about going after the mass audience?

That answer is best found a few hours after browsing.

In the meantime, here is that panel discussion as it was broadcast on January 14, 1961.
Transcripts
Back to Top
Edward R Murrow. Daniel Schorr and alexander Kendrick to join at random Next good evening ladies and gentlemen and welcome to another session of At Random Show dedicated to the lively art conversation. Tonight, our At Random session is featured by the presence of a number of CBS's top correspondents and meet in just a few moments. I would like to remind you once again that the opinions expressed by my guests are strictly the role show is unrehearsed. Now let's meet our distinguished panel this evening first, this is Peter calendar Cbs news correspondent in Tokyo and the Far East. This is Daniel Schorr Cbs news correspondent in West Germany and also an authority on africa. This is alexander Kendrick, very distinguished gentleman from London. CBS news correspondent station in London and an authority on all european affairs. This of course is the Dean himself who needs no introduction. Edward R Murrow. Certainly one of the most distinguished personalities in broadcasting and this is a gentleman we're glad to welcome to at Random dr robert M. Hutchins, the former president and chancellor of the University of Chicago and the former president of the Ford Foundation. Now he's president of the funds for the Republic and chairman of the board of editors of encyclopedia Britannica. And this is Blair Clark Cbs, News correspondent in new york. Now, it's joint mm numbers. It's impressive, gentlemen have all been properly introduced and without wasting any time. I like to toss out a question. I think we're all concerned with, particularly in view of the headline. I saw the other day that urgent Kennedy to tell the public the truth about our relations with Russia. I wonder if the field of communication which were all engaged is doing the job it should do and can do in keeping our people informed dr Hutchins, you're certainly involved in that problem as all of us are you want to pass it to mr morrow? And the result? How can we do a better job? What do you think? I think there is something lacking someplace along the line. I think all of us, newspaper, radio, television could do a more intense and more deliberate job in fulfilling what we call our obligations. Search me. Yes. And now. Well, yes. And we're no. Yeah. World Cup. I'd like to hear from some of the colleagues who haven't yet spoken on this point before I going on that. Peter, what do you think? Mm, Nothing. You're shaking your head as if you have no opinion or we're not doing the right job. No opinion. No opinion, dan, tough one. Uh, this is this is uh, don't stop you. This is collusion. Just wonder what would happen if nobody said anything. A new kind of a cup. I think the conclusion to this would be. There may be something in what you say. Seriously, though, I'd like to start. Yes, I like to put that question to you on a serious note. Mm. What was your question? What was why in radio television, the press doing such a great job keeping our public informed. Why is it doing such a great job? That's the reverse of what I said original. It's an interesting way to stay.
Up Next
Popular Playlists
Best Yoga Podcasts: Listen & Learn New Poses Sour Shoe's Greatest Moments on The Howard Stern Show Listen to: Top 15 Funniest Barack Obama Quotes 9 Game Design Podcasts Every Game Designer Needs to Hear 7 Podcast Episodes About The Golden State Killer That Will Keep You Up at Night David Parker Ray & Shocking Audio of the Toy Box Killer You Need to Hear Best UFO Podcasts That Will Abduct Your Mind Controversial Joe Rogan Experience Episodes Audio Wack Packer Beetlejuice Best Moments on The Howard Stern Show 12 Best Episodes of the NoSleep Podcast to Keep You Up at Night Sexy ASMR Audio to Turn You On
Popular Categories
ASMR Business & Tech Cannabis Fashion & Beauty Gaming History Home & Garden Kids & Family Spirituality Travel
Add to playlist
New playlist