Your changes have been saved
All Audio Sacred Inclusion Network 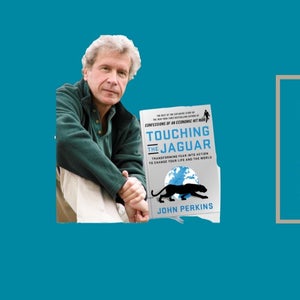 Author, activist and renegade economist John Perkins traces his journey from Peace Corps volunteer to co-founding the Pachamama Alliance, a non-profit devoted to establishing a world future generations will want to inherit.

Best known for his best-selling book, Confessions of an Economic Hitman, P
Category: Spirituality
Publish Date: Aug 12, 2020
Tagged in this Audio:
More
Jump to Full Description
Snippets are a new way to share audio!
You can clip a small part of any file to share, add to playlist, and transcribe automatically. Just click the to create your snippet!
Snippets: Clips of "Touching the Jaguar" that people like

There are currently no snippets from "Touching the Jaguar".
Snippets are an easy way to highlight your favorite soundbite from any piece of audio and share with friends, or make a trailer for Sacred Inclusion Network
Create a Snippet
Playlists that "Touching the Jaguar" appears on.

There are currently no playlists containing this audio.
Add this audio track to one of your playlists
Add to Playlist
Up Next
Full Description
Back to Top
Author, activist and renegade economist John Perkins traces his journey from Peace Corps volunteer to co-founding the Pachamama Alliance, a non-profit devoted to establishing a world future generations will want to inherit.

Best known for his best-selling book, Confessions of an Economic Hitman, Perkins describes how his life was irrevocably changed when a Shuar shaman in the Amazon jungle healed his life-threatening fever. "He healed me by helping me change my perception...and he demanded as payment for having healed me that I become his apprentice."

Having graduated from business school before joining the Peace Corps, Perkins didn't see a future in becoming a shaman. So instead, he became an economist and, eventually, chief economist of a major consulting company.

His job was to "identify countries that had resources our corporations coveted... and then convince that country that it should accept huge loans from the World Bank or other organizations" to pay for costly infrastructure projects.

It took him awhile, but eventually it dawned on him that the game was rigged.

In this podcast, Perkins describes the common denominator of what he learned from his first shaman teacher and his work as an economist: that perceptions shape reality. Where once a shaman helped shift his view of the conditions he found threatening as a young Peace Corps volunteer, he later was also able to use data to persuade heads of countries to borrow large sums of money to pay for infrastructure projects.

The shaman he worked with taught him about the process he calls "touching the Jaguar," the key to shifting perceptions and the title of his new book.

"'Touching the Jaguar' means that we identify the things that are holding us back: our barriers, our fears...When we touch that Jaguar, we receive energy from the Jaguar or wisdom or creativity that allows us to change our perception. And when we change our perception, we then can take new actions that change reality."

That desire to positively shift perceptions is part of the origin story of the Pachamama Alliance, which Perkins, Bill and Lynn Twist founded in 1995.

The three and a team of others had traveled to the rain forest at the invitation of the Achuar, an indigenous Amazonian community.

"They came to me and asked me, 'will you help us touch the Jaguar? Help us reach out and join forces with the people we most fear -- you and your people. Help us create a partnership and alliance with the people we most fear so that we can help you change your dream, and we can all work together to change the this terribly destructive dream of the modern world that's creating a death economy."

In this podcast, Perkins explains what he means by "the death economy." He also gives a simple five-part series of questions that anyone can ask themselves to help them more easily get in touch with and actualize their purpose.

Perkins' latest book is Touching the Jaguar: Transforming Fear Into Action To Change Your Life And The World.