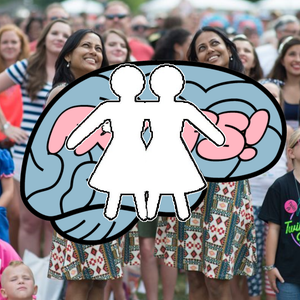 Share
station description Things you didn't know, things you thought you knew, and things you never knew you ... read more

Twins, synchronicity, science, anomalies, and dark mysteries. Support the show Merch, book Music by Kevin MacLeod  Read the full script. Reach out and touch Moxie on FB, Twit, the 'Gram or email.     In 1940, a pair of twin boys, only three weeks old, were put up for adoption in Ohio.  Separate fam
Category: History
Publish Date: Oct 13, 2021
Tagged in this Audio:
More
Jump to Full Description
Snippets are a new way to share audio!
You can clip a small part of any file to share, add to playlist, and transcribe automatically. Just click the to create your snippet!
Snippets: Clips of Twins Remix (ep. 169) that people like

There are currently no snippets from Twins Remix (ep. 169).
Snippets are an easy way to highlight your favorite soundbite from any piece of audio and share with friends, or make a trailer for Your Brain on Facts
Create a Snippet
Playlists that Twins Remix (ep. 169) appears on.

There are currently no playlists containing this audio.
Add this audio track to one of your playlists
Add to Playlist
Up Next
Full Description
Back to Top
Twins, synchronicity, science, anomalies, and dark mysteries. Support the show Merch, book Music by Kevin MacLeod  Read the full script. Reach out and touch Moxie on FB, Twit, the 'Gram or email.     In 1940, a pair of twin boys, only three weeks old, were put up for adoption in Ohio.  Separate families adopted each boy and coincidentally named both James, calling them Jim for short.  They grew up never knowing anything about one another, but their lives were bizarrely similar.  They each had a dog named Toy and in elementary school, each both was good at math, showed talent in woodshop, but struggled with spelling.  But it was as they moved into adulthood that coincidences really started to pile up.  My name... If one is good, two must be better, so today we were talking about twin on the first of a pair of twin episodes.  Let’s start with a quick review.  Fraternal twins occur when two eggs are separately fertilized.  They are genetically distinct, basically regular siblings that happened to be conceived at the same time.  Or not.  There’s a rare circumstance called superfetation, where a woman ovulates while already pregnant and the second egg also gets fertilized.  Multiple eggs being released during ovulation can sometimes result in heteropaternal superfecundation, meaning the eggs were fertilized by different men’s sperm, creating fraternal twins with different fathers.  Identical twins occur when a fertilized egg splits, creating two zygotes with the same cells.  The splitting ovum usually produces identical twins, but if the split comes after about a week of development, it can result in mirror-image twins.  Conjoined twins, what we used to call Siamese twins, can result from eggs that split most of the way, but not complete.  Twins account for 1.5% of all pregnancies or 3% of the population.  The rate of twinning has risen 50% in the last 20 years.  Several factors can make having twins more likely, such as fertility therapy, advanced age, heredity, number of previous pregnancies, and race, with African women have the highest incidence of twins, while Asian women have the lowest.    Twins have always been of great interest to scientists.  There’s simply no better way to test variable vs control than to have two people with identical DNA.  Identical twins share all of their genes, while fraternal twins only share 50%.  If a trait is more common among identical twins than fraternal twins, it suggests genetic factors are at work.  "Twins studies are the only real way of doing natural experiments in humans," says Tim Spector, a professor of genetic epidemiology at Kings College, London. "By studying twins, you can learn a great deal about what makes us tick, what makes us different, and particularly the roles of nature versus nature that you just can't get any other way.”   NASA was presented with a unique opportunity in the Kelly brothers, identical twins Scott, a current astronaut, and Mark, a retired astronaut.  As part of the "Year in Space" project, which would see Scott spend 340 on the ISS, the brothers provided blood, saliva, and urine samples, as well as undergoing a battery of physical and psychological tests designed to study the effects of long-duration spaceflight on the human body.  According to Dr Spector, twin studies are currently underway in over 100 countries.  Working with data and biological samples in the TwinsUK Registry, Spector’s team has found more than 600 published papers showing a clear genetic basis for common diseases like osteoarthritis, cataracts and even back pain.  "When I started in this field, it was thought that only 'sexy' diseases [such as cancer] were genetic," Spector says. "Our findings changed that perception."   Back on our side of the pond, the Michigan State University Twin Registry was founded in 2001 to study genetic and environmental influences on a wide range of psychiatric and medical disorders.  One of their more surprising findings is that many eating disorders such as anorexia may not be wholly to blame on societal pressured by may actually have a genetic component to them.  "Because of twins studies,” says co-director Kelly Klump, “we now know that genes account for the same amount of variability in eating disorders as they do in schizophrenia and bipolar disorder. We would have never know
Up Next
Popular Playlists
Best Yoga Podcasts: Listen & Learn New Poses Sour Shoe's Greatest Moments on The Howard Stern Show Listen to: Top 15 Funniest Barack Obama Quotes 9 Game Design Podcasts Every Game Designer Needs to Hear 7 Podcast Episodes About The Golden State Killer That Will Keep You Up at Night David Parker Ray & Shocking Audio of the Toy Box Killer You Need to Hear Best UFO Podcasts That Will Abduct Your Mind Controversial Joe Rogan Experience Episodes Audio Wack Packer Beetlejuice Best Moments on The Howard Stern Show Best NoSleep Podcast Episodes To Terrify You Sexy ASMR Audio to Turn You On
Popular Categories
ASMR Business & Tech Cannabis Fashion & Beauty Gaming History Home & Garden Kids & Family Spirituality Travel
Add to playlist
New playlist