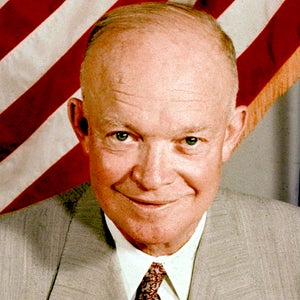 From Audio: Uproar On Capitol Hill - President Eisenhower And The 1958 Budget - 1957 - Past Daily Reference Room

Start Time: 00:00 End Time: 02:37
Capitol Hill and the budget, and almost yearly ritual of shock, outrage, quiet agreement and back to business as usual. In 1957, President Eisenhower proposed a budget of some $73 billion ($661 Billion in 2021 money). And, true to form, it sent shock waves all over Washington – with the ever-familia
Category: News & Politics
Publish Date: Aug 27, 2021
Snipped By:
Share
station description Past Daily: News, History, Music And An Enormous Sound Archive.

Past Daily: Presidents Being Presidential
01:37:44 11/2/20 5 audios
Up Next
Full Description
Back to Top
Capitol Hill and the budget, and almost yearly ritual of shock, outrage, quiet agreement and back to business as usual. In 1957, President Eisenhower proposed a budget of some $73 billion ($661 Billion in 2021 money). And, true to form, it sent shock waves all over Washington – with the ever-familiar chorus “How Do We Pay For This Thing?” Truths to tell, it was the largest peacetime budget proposal ever; $73 billion was an unheard of sum at the time. As President Eisenhower laid it out at the time (January 1957): The figures contained in this budget for the fiscal years 1957 and 1958 are not precisely comparable to the actual figures for prior years. Under the provisions of legislation enacted last year, the financial transactions for the greatly expanded Federal-aid highway program are included in a self-liquidating trust fund and are not in the budget totals. Revenue policy.–It is my firm belief that tax rates are still too high and that we should look forward to further tax reductions as soon as they can be accomplished within a sound budget policy. Reductions in tax rates would give relief to taxpayers and would also release funds for the activity and investment necessary for sustained economic growth through private initiative. However, the reduction of tax rates must give way under present circumstances to the cost of meeting our urgent national responsibilities. For the present, therefore, I ask for continuation for another year of the existing excise tax rates on tobacco, liquor, and automobiles, which, under present law, would be reduced next April 1. I must also recommend that the present corporate tax rates be continued for another year. It would be neither fair nor appropriate to allow excise and corporate tax reductions to be made at a time when a general tax reduction cannot be undertaken. In the area of taxation, I am especially interested in the problems of small business. Last August the Cabinet Committee on Small Business made a series of carefully considered recommendations in this field. Some relief in the tax burden affecting small business, as recommended by that Committee, which will give help with a minimum loss of revenue should have early consideration by the Congress. Any changes involving substantial loss of revenue should be considered at a later time when a general tax reduction is possible. The present estimates of budget receipts for 1958 are based on the assumption that the Nation will continue to have a high level of business activity with increasing national income, and that the present tax rates will be continued. They are the best estimates we can make at this time, but, since they relate to a period 6 to 18 months away, significant changes may take place before the fiscal year 1958 is ended. On hand for this discussion on the proposed Eisenhower 1958 budget is Senator George A. Smathers (D-Florida) and Senator John Sherman Cooper (R-Kentucky). Here is that program as it was originally heard on May 26, 1957 over NBC Radio.
Transcripts
Back to Top
now here is the moderator of today's program steve McCormack. The current controversy on Capitol Hill began last January when President Eisenhower presented to the Congress, the largest peacetime budget in our history, over $73 billion dollars Compiled in a massive volume of some 1000 pages of the president's proposals for the successful operation of his program. This means you the individual taxpayer of America will pay 51 cents of every dollar collected to maintain this budget. The principal question is, will reduction in the national budget seriously impair our security and our economy. And to resolve this, we're happy to have as our guest today on the american forum. Senator George, a smathers, democrat of florida. Senator john Sherman cooper, Republican of Kentucky. Well, gentlemen, let's begin with this question. Do these house military cuts mean to you a reckless gamble with the nation's security? Senator status steve no, it doesn't mean to me a reckless gamble with the nation's security. I think the real issue is not whether we're going to have any national defense or a strong national defense. I don't think that the issue is whether or not we're going to have even a foreign relations program or no foreign relations program. The issue is, can we have a reasonable foreign relation program And can we have a adequate national defense and still cut this budget. I think that we can cut it and I'm prepared to try to explain it as we go along. Senator Cooper, How do you feel? So I feel that it is gambling with our national security. The military budget represents about 60% of its total cost. I see nothing in the last year that has changed which would make less necessary a full and adequate defense. Certainly we've seen what's happened in Hungary. Been danger of war in the Middle East. Russia has exploded the hydrogen bomb again. Again. It has missiles, has a great military force and we cannot be sure that it will not be used. You feel that we can't be sure. Senator uhh steve, I would say this the reason that I think this budget can be cut. This is the same budget that in january, the president, United States himself said he thought it could be cut and he urged the Congress as its constitutional duty to cut it. It's the same budget that Secretary Humphrey just a few weeks later said if we didn't cut, it was going to curl the hair of the general economy of America. It's the same budget that Chairman Adams just a few weeks ago said he thought it could be cut. It's the same budget that Bill Nolan and other people
Up Next
Add to playlist
New playlist