Your changes have been saved
All Audio The Marvel Guys

Share
station description If it's going on in the world of Marvel, we're discussing it.

Start Time: 01:00:29 End Time: 01:03:03
The Marvel Guys step into the Marvel Multiverse and explain what exactly a "variant" is. A variant, apparently, is an alternate version of a character that the audience knows.
Category: Other Audio
Publish Date: May 23, 2021
Snipped By:
Share 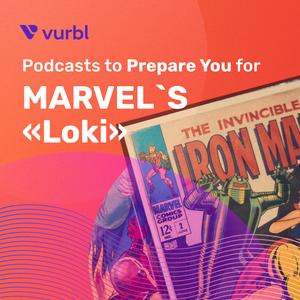 An Audio Guide To Marvel's "Loki"
01:24:09 5/25/21 9 audios
Up Next
Full Description
Back to Top
The Marvel Guys step into the Marvel Multiverse and explain what exactly a "variant" is. A variant, apparently, is an alternate version of a character that the audience knows. Variants let the audience see how a character might have turned out if they'd made different life choices. Much like the multiverse, variants offer unlimited storytelling possibilities.
Transcripts
Back to Top
seven unless you re casting and they would never ever ever do that. So you mentioned the word variance. Which is interesting because this is the first time we've ever heard variant in the M. C. U. Which means we're fully, where in the multiverse now variant is literally a varying you know figure of a person's being like I'm one person in an alternate reality, there would be a variant of Jordan And we saw in the trailer that there was around 1330, I can't remember the exact number. Um of Loki is just just from that piece of paper. So we're about to see like full fledged multiverse stuff coming out. This is probably going to be our first introduction into it because, well one division didn't quite go there yet. Um They gave us the roots for it but I don't know if this is gonna be very interesting. Did you know that in terms of like search power as far as search engines go, Loki has had more uh excitement based on how they can measure. Then one division and captain are falcon and Winter soldier combined. Yeah, I can see that everybody wants Loki because they didn't really, there was never really enough hype around long division and Falcon and Winter Soldier was already kind of like, yeah it's going to be good but it's going to be kind of basic. Loki is an interesting one. Yeah. And this was actually pre one division and pre winter soldier stuff. So they were just given the choice of the three I guess for for searching. And he was the guy that stood out and people love Tom Hiddleston. So um I'm very intrigued. I love love How we are getting three different TV shows and they're all completely different. They could not be more. I mean come on, that's so cool. We have a sitcom turned action, you know, romance and drama. And then we have an action based, uh, you know, grounded in reality theatrical performance between falcon and the Winter Soldier. And then we're going to get a time, you know, travel, meddling thing that goes on with a personal journey of a villain, much like the man. This is so cool, unlimited, unlimited possible.
Up Next
Popular Playlists
Best Yoga Podcasts: Listen & Learn New Poses Sour Shoe's Greatest Moments on The Howard Stern Show Listen to: Top 15 Funniest Barack Obama Quotes 9 Game Design Podcasts Every Game Designer Needs to Hear 7 Podcast Episodes About The Golden State Killer That Will Keep You Up at Night David Parker Ray & Shocking Audio of the Toy Box Killer You Need to Hear Best UFO Podcasts That Will Abduct Your Mind Controversial Joe Rogan Experience Episodes Audio Wack Packer Beetlejuice Best Moments on The Howard Stern Show Best NoSleep Podcast Episodes To Terrify You Sexy ASMR Audio to Turn You On
Popular Categories
ASMR Business & Tech Cannabis Fashion & Beauty Gaming History Home & Garden Kids & Family Spirituality Travel
Add to playlist
New playlist