Your changes have been saved
All Audio ‎Voyager Mix Sessions 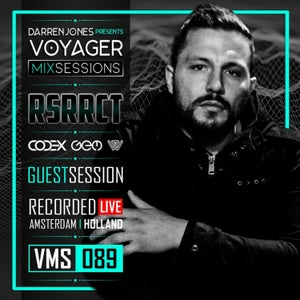 Share
station description Based in the capital of Scotland, Darren Jones is…

Talented new comer - RSRRCT - makes his debut on Voyager Mix Sessions this week with a signature guest mix that not only encapsulates his deep, heavy and driving sound direction, but also showcases several of his recent Beatport Top 100 original tracks and a couple of unreleased productions yet to b
Category: Music
Publish Date: Oct 12, 2021
Tagged in this Audio:
More
Jump to Full Description
Snippets are a new way to share audio!
You can clip a small part of any file to share, add to playlist, and transcribe automatically. Just click the to create your snippet!
Snippets: Clips of Voyager 89 Guest Mix By RSRRCT that people like

There are currently no playlists containing this audio.
Add this audio track to one of your playlists
Add to Playlist
Up Next
Full Description
Back to Top
Talented new comer - RSRRCT - makes his debut on Voyager Mix Sessions this week with a signature guest mix that not only encapsulates his deep, heavy and driving sound direction, but also showcases several of his recent Beatport Top 100 original tracks and a couple of unreleased productions yet to be announced, exclusively for the show.

Originally from Washington DC, RSRRCT produced as a hobby for several years until he relocated to the Dutch capital of Amsterdam and discovered his love for dark, driving, and melodic techno. In just over one year, he’s caught the attention of many big names whilst releasing on some of the industry’s most iconic labels including, Ballroom Black, Codex, EXTIMA, Gem Records, Off Recordings, Reload Records, Renesanz and Say What? Records.

RSRRCT first performed in empty warehouses, abandoned office buildings and various hidden spots tucked away within the industrial heart of Amsterdam, regarding this as a vital and vibrant part of electronic music culture. These days, he’s a regular on the Dutch rave circuit and has already played at several notable events throughout his short career. Be sure to follow him across all social media platforms to find out more about his future projects.

If you enjoyed this week’s guest mix, please consider supporting the show by commenting, liking and/or reposting. A new mix awaits you each and every Tuesday, so feel free to hit that follow button and be one of the first to hear the latest session.