All Audio The Unseen Paranormal Podcast 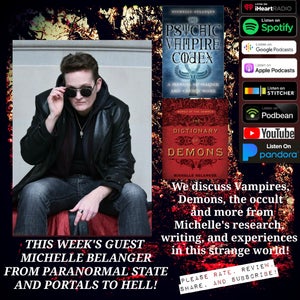 What is a true Demon?

From Audio: Vampires, Witches, and Demons, OH MY! with Michelle Belanger from "Portals To Hell" and Paranormal State

Share
station description Weekly podcast discussing the history behind the paranormal . Some of the scariest ... read more

Start Time: 20:30 End Time: 24:30
Medium and author of "The Dictionary of Demons" Michelle Belanger discusses demons, her encounter with the demonic, and her definition of what is a true demon.
Category: Paranormal
Publish Date: Aug 04, 2021
Snipped By:
Share
station description Weekly podcast discussing the history behind the paranormal . Some of the scariest ... read more

The Unseen Paranormal Podcast
Tagged in this Audio:
More
Jump to Full Description Transcript
Playlists that What is a true Demon? appears on.
Share

The Demonic Phenomena
04:07:04 8/4/21 10 audios
Up Next
Full Description
Back to Top
Medium and author of "The Dictionary of Demons" Michelle Belanger discusses demons, her encounter with the demonic, and her definition of what is a true demon.
Transcripts
Back to Top
right. And and speaking of demons there, there are some of the shows on tv that are kind of put this out in the ethos, because you're talking about, you have the satanic panic back in the Back in the 80s 90's and anything like pentagrams and that type stuff was evil and demonic. I think that's kind of come over into the consciousness now with all the paranormal shows. And then you have some of them that kind of further that of that every place they go, one of them is getting possessed or you know, there's there's a demon, there everything is demons just because they don't understand it. What would you say to people about demons? Because you wrote the dictionary of demons? What would you say to people? The difference in demons with religion versus real life and that type of stuff? I've got so much to say about that. I mean, the first thing that I would say is the word demon in the paranormal is overused. Uh and and the idea that, you know, everything that you encounter that is dark or violence must necessarily be a demon is false. It's just, it's simply there is just not that much demonic activity out there. You know, that said, I do understand where some people are coming from because the toolkit that their culture gave them, they really only have demon as the word that they can apply to anything that seems evil. Seems malevolent, seems militias. Uh, it's interesting because, you know, if we were in the Middle East, I think the word that everybody would default to would be gin for the same reason that, that's kind of like the blanket term for everything that mischievous, everything that, you know what we would call a poltergeist would get labeled a gin over there. And what we would call a demon would get labeled a gin and what we would call a house spirit would get labeled a gin. So when you only have one tool and when the only thing you've got is a hammer, everything looks like a nail that said. Uh someone who studied like the origins of the word where our idea of demons possession and exorcism come from the roots of culture all the way back to sumer and Babylon and thousands and thousands of years. I will say that I have encountered a few spirits that I don't have a better word for than demon, but I've got a really narrow definition and that has to be non human demonstrably something that has probably never been given, never incarnated as a human being at all. It is intelligent and usually very scarily so intensely intelligent. It is actively malicious and malevolent, like there's no misinterpreting its behaviour, it's not just being mischievous, it actively trying to harm people. And then the fourth thing which is pretty big for me is for whatever reason, it has a focus on human beings, on the people, in the location or on a specific person that it's attached itself to and usually with an intent of having an influence over that person up to and including trying to gain control over their body to some extent. Yeah, that that makes a lot of sense and it's nice to have like a defined definition like that. Have you ever encountered demons in your psychic work? I can count on pretty much 11 hand with an additional finger at this point. The times where I encountered something that I would give that label and like I said, there are things out there that do fit with the term that inspire I think some of the myths about them and They are incredibly rare. I say, like, I can count on one hand plus one finger and I've been doing this for over 30 years. We'll return with our awesome chat with Michelle Belichick right after this.
Up Next
Add to playlist
New playlist