What's in a Label?

Start Time: 07:08 End Time: 10:21
Some may consider labels limiting, but others find it freeing. A panel discusses the labels they use and it how it affects them.
Category: LGBTQ
Publish Date: Jun 15, 2021
Snipped By:
Share

Kai DeJesus Audio Station
Tagged in this Audio:
More
Jump to Full Description Transcript
Playlists that What's in a Label? appears on.
Share 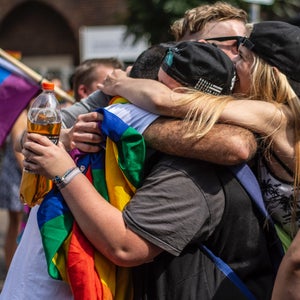 9 Podcast Episodes for LGBTQ+ Parents
01:03:26 6/15/21 10 audios
Up Next
Full Description
Back to Top
Some may consider labels limiting, but others find it freeing. A panel discusses the labels they use and it how it affects them.
Transcripts
Back to Top
So I know that the way that I described my own sexual orientation has changed over time and that especially was true as I learned new terms, kind of got comfortable with them. And then also gave myself space to explore your my own identity. Have the words that you use to describe your identities changed over time. They've changed so much over time, identified as straight until I was 55 years old. So hey there right there. And then when I did come out, I just identified as bisexual. But as I started exploring myself more, I understood that I had all these other labels. So yeah, it did change over time as I became familiar with other words and with myself and faith. What about yourself? Have the words that you've used? Also changed over time? Like Lynette myself. Oh absolutely, Absolutely. You know, um when I first came out in 1998 I came out as a lesbian. Um and then I was like, oh that's, you know, obviously that includes dudes, right? And they're like, no you can't do that. So I thought that for like a year that didn't work out, um led to my expulsion from the lesbian circle of college and um ended up with me identifies queer and and saying, hey, this is much more radical for me. This is much more radical. Um and then, you know, eventually identifying smith sexual and then finally finding the term bisexual within a political context that I had not had before. Um and come to find out that the term bisexual was to me much more political because it gave me an opportunity to um rub people's faces and binaries that they didn't realize that they're already living in that I don't. So but I feel like I feel lucky, you know, as a black american to have that also that context and understanding that like since I was a kid that you know how identified racially and my race has changed like seven times maybe. So um like just give me real like right? Like I remember being afro american for like one year um so like and we were like no no no we don't like that was like all right. Um and so we have all these different words that we use for different things and those change over time. And so I think it's really important to be like really open expensive of many different labels and so we we see people just kind of changing terms just like we change. Yeah, it's been really almost liberating for myself to also learn about other terms and what they mean and then to be able to reflect like oh that you know, does that do I feel like that's that's the right fit. I know that I also really strongly identify with the term queer spawn. I have queer parents and that was a term to kind of place my own identity as someone who grew up culturally queer and surrounded by career culture and to have that term. And when I heard it, I was like, oh, there's a word for me, and I love it, and it was really affirming just to have that term sometimes.
Up Next
Popular Playlists
Best Yoga Podcasts: Listen & Learn New Poses Sour Shoe's Greatest Moments on The Howard Stern Show Listen to: Top 15 Funniest Barack Obama Quotes 9 Game Design Podcasts Every Game Designer Needs to Hear 7 Podcast Episodes About The Golden State Killer That Will Keep You Up at Night David Parker Ray & Shocking Audio of the Toy Box Killer You Need to Hear Best UFO Podcasts That Will Abduct Your Mind Controversial Joe Rogan Experience Episodes Audio Wack Packer Beetlejuice Best Moments on The Howard Stern Show Best NoSleep Podcast Episodes To Terrify You Sexy ASMR Audio to Turn You On
Popular Categories
ASMR Business & Tech Cannabis Fashion & Beauty Gaming History Home & Garden Kids & Family Spirituality Travel
Add to playlist
New playlist