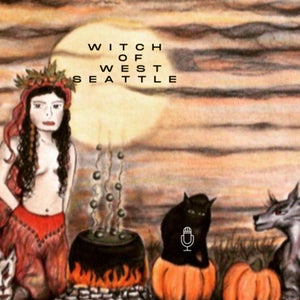 Just in time for Halloween, I talk to my favorite Witch. She calls herself the Witch of West Seattle. Her witchcraft requires her anonymity, yet she openly shares ghost stories and full moon folklore.
Message from The Witch of West Seattle:
"It's that time of year when the darkness takes over, and f
Category: Documentary
Publish Date: Sep 24, 2021
Tagged in this Audio:
More
Jump to Full Description
Snippets are a new way to share audio!
You can clip a small part of any file to share, add to playlist, and transcribe automatically. Just click the to create your snippet!
Snippets: Clips of Witch of West Seattle that people like

There are currently no snippets from Witch of West Seattle.
Snippets are an easy way to highlight your favorite soundbite from any piece of audio and share with friends, or make a trailer for Virtual Campfire with Krystal Kelley
Create a Snippet
Playlists that Witch of West Seattle appears on.

There are currently no playlists containing this audio.
Add this audio track to one of your playlists
Add to Playlist
Up Next
Full Description
Back to Top
Just in time for Halloween, I talk to my favorite Witch. She calls herself the Witch of West Seattle. Her witchcraft requires her anonymity, yet she openly shares ghost stories and full moon folklore.
Message from The Witch of West Seattle:
"It's that time of year when the darkness takes over, and for some of us, our favorite time of year. But for those who prefer the light, have no fear of the dark, instead, embrace it, and find the magick, beauty, and light within the darkness."
Artwork from podcast cover by @monicamiklova on Instagram. She mentions the Iron Goat Trail during one of her stories. Here is the history behind the haunted trail: Iron Goat Trail

In a lush forest near Steven’s Pass in Washington state, remnants of the 1910 Wellington Avalanche are scattered. It was the worst disaster of its kind in American history.

At the time, the town of Wellington had a small rail station in the Tye River Valley. The trains passing through here would slow to 5mph as they twisted around the mountain passes. During the final week of February 1910, a blizzard blanketed the valley with impassible snow. Not even a train could move in these conditions.

Two trains -the passenger train Spokane Express, the other a mail carrier- would be snowed in here for six days. Many passengers decided to wait on the train for conditions to improve, while others left on foot. Due to conditions, all telegraph lines in Wellington were cut off. When the snow began turning to rain, passengers and crews saw hope. On the morning of March 1, 1910, a bolt of lightning struck the mountainside, creating an avalanche that sent snow towards the town.

Both trains rolled 150 feet down into the valley as the avalanche buried the rail station and town. In total, 96 people perished. All those who left the trains prior to the avalanche survived.

More than a century later, hikers along the Iron Goat Trail can see remnants of the wreckage, tunnels where trains passed, man made filtration streams, and constant reminders of how nature grows when humans leave.

The hike along Iron Goat Trail can take you any where between 3-12 miles round trip depending on how far you go. If you start at the main parking lot where the replica boxcar is, about 950 feet of switchbacks will take you to the plateau where a sign will point you in the direction of Wellington. That’s where the trains’ remnants are three miles away. In the opposite direction, you see many man-made tunnels and remnants of train tracks. There are several flowing streams of fresh water along this way and beautiful views of the surrounding valley.

The Iron Goat Trail isn’t going to lead you to a pristine clear lake nor offer majestic views of Mt Rainier, but the payoff here is the history of town and people who were once on their way somewhere.

Now close your eyes again. Listen. You sure the sound was wind rustling leaves?