All Audio Way Out Here

From Audio: One Year Anniversary 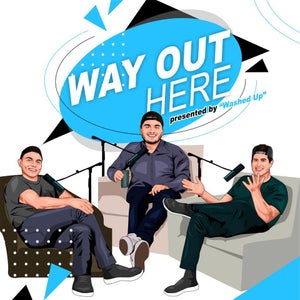 Way Out Here
Tagged in this Audio:
More
Jump to Full Description Transcript
Playlists that WOH Funniest Moments appears on.

There are currently no playlists containing this audio.
Add this audio track to one of your playlists
Add to Playlist
Up Next
Full Description
Back to Top
Funniest clips from WOH
Transcripts
Back to Top
Me either. Like I had a big mac the other day for the first time in like 48 hours and dude, it was like just lettuce, you know, you know who really is about the lettuce is Mcdonald's dude, You know what I'm saying? Dude, do the big Mac So good big chance. Big Mac is so salad, but the big man, yeah, that's why I got two of them freaking it's like a salad. Yeah, burger salad. Yeah, you throw that in a bowl, you're like, wow, look at the salad that I got, you literally could honest to God, you could take off the lettuce and put it into a bowl and have a side salad with your big Matthew 10 seconds and you still have lettuce on your Big Mac that and that and adding like way too much mayo on some of their I'm down with the mayo though dude, I just, I like mayo but if you put too much your food starts looking kind of nappy looks kind of Yeah. All right, who made this back there? I've got some special sauce on it and it looks kind of suss is such a perfect, perfect, terrible thing to think about honestly. Do I love, do I love those suspect chickens? Oh dude, when I open that and I see the mayo on the wrapper, I know it's busting dude, like I know it's going to be good, but had a mc chicken with cheese. Oh, I asked Hannah, Hannah turned me onto that, like she loves a good jesus is good, but often cost extra to get the cheese also, it feels weird or, and I don't know why, but I've ordered it for Hannah a lot and it's just also, I got their new like uh I got their new like crispy make chicken thing, they just get a normal make chicken, they just probably, they just fry it one more time to make it a crispy chickens are fried. Already know. I know, but like they have like their new like, it's like the competitive, it's spicy tuna sandwich. Dude, it's just a freaking like chicken, I'm a sucker for spicy chicken sandwich. It's actually very good. Yeah, it's just a chicken sandwich. I had a chicken sandwich for breakfast this morning from Wendy's was good. That is a place spicy chicken sandwiches. Bang, right. I didn't even know if this chicken sandwich, I just saw, I woke up in a panic, I was late and I am not you. I needed some food and I was like, I'm gonna swing by Wendy's because I'm literally a block away and I was like, give me the number one. And it was a maple crescent bread with bacon, spicy chicken as the, like the meat. And I was like, what the it was so good. It was actually like, I don't really get a lot of chicken sandwiches, but I would definitely do that. Love chicken sandwiches. Might end up going back there again. We're twice in one day. Have you had a chick fil a's breakfast 02? Is there any difference? Like, is there any difference in like their menu? I guess? I don't think so. But they come with biscuits instead of I'm not a big biscuit guy biscuits are just some, here's the thing you gotta butter the biscuits and then put it on a sandwich because dry biscuits do. Dry biscuits are cancer. The worst. At least spit on it first. Like come on. Okay seriously, I can't stand biscuits. Like it's a good dude, you gotta drown and gravy. But honey, the best part honey do honey the KFC KFC honey over it. Those are the only ones. Iron. Yeah. Yeah, those, those are actually like super good. You don't want to know what I do
Up Next
Add to playlist
New playlist