Your Greatest Enemy Is Yourself | Eliot Marshall

Start Time: 16:50 End Time: 21:23
Eliot talks about how he deals with his loses, and knowing that your greatest enemy is yourself.

The ROI Online Podcast
Jump to Full Description Transcript
Playlists that Your Greatest Enemy Is Yourself | Eliot Marshall appears on.
Share 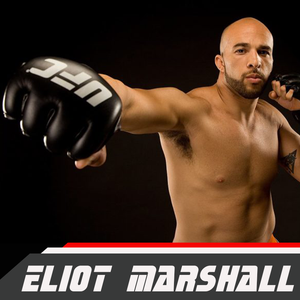 Fear, Depression, & True Strength - Eliot Marshall
01:04:36 5/9/21 5 audios
Up Next
Full Description
Back to Top
Eliot talks about how he deals with his loses, and knowing that your greatest enemy is yourself.

Transcripts
Back to Top
Mhm. So let's talk about after a loss one of your losses. Yeah. How do you do a healthy self evaluation of assessment of what you did, right and what you did wrong and how do you trust yourself that you're doing it healthy or being too hard on yourself or not being hard enough talking about fighting just about how do you handle that conversation in your head? Well, you drink a lot with fighting and you shouldn't because you're probably concussed. Um You cry, you don't sleep uh with fighting. It's the darkest cloud you've ever had over your head. You know, you've never if you know, it's like someone died, it's it's literally like someone died. Um It's very hard to get away from. Um Yeah, yeah, you have some loving, you get up, man, you just get up uh you just get up and fight again, you just get up, you you walk back in the gym like, I don't know what else to say, You just and I don't know if it's something innate in us that we do, that we do it, that we could, you know? Uh But yeah, as far as business goes, uh so easy for me after fighting, I have to say, you know, like, and and not even after fighting, it's so easy for me because I'm not I'm not stuck and trapped in the hell of my own mind anymore, like, and that's the worst place, right? Like when I'm when you're when you know, when I when I go back to my 2016, when I broke down, there was no reason, man, like, it wasn't like the business was failing, it wasn't like my wife was leaving me, none of my kids were sick, nothing, absolutely nothing. Just straight anxiety straight like, yo you know this devil that's that, that you have been beating down, Oh, he ain't going anywhere right now, He's here, he's gonna sit on your shoulder and he's not gonna go anyway, there was no reason for me. My business was growing thriving employees, boom, boom, boom, boom, boom, nice dude, I just got back, I just gotten back from a two Week Hawaiian vacation, you know, like there's no reason to be up all night crying, so when you can deal with that, like as far as that man, everything else just just quieter, you know? So was it that you met this competitor, This opponent that you never really fought before, that you didn't know how to prepare for this? No, it was that I had met him a bunch of times. I had just masked it with fighting. I had masked this competitor with fighting because I gave myself reasons to be nervous and scared, really scared like a fight or whatever, you know, And and the real deal demon of my life when I was really scared of, which was me and who I was and maybe what a piece of shit I was or maybe how weak I was or how no one liked me and no one was going to like me and everyone was going to leave me and then this is going to get a little dark and deep for a second my whole life, I was told that Hitler was going to come again because I grew up with holocaust survivors, you know? So That that was happening, No one would be there to help me and that I would be all alone, Right? Because I had no friends growing up like two. And so I'd be all alone by myself. So I would, you know, so I would try to scream at how tough I was. That's probably why I went into fighting in the first place, you know? And then when you fight it's shown that you're like, if you're not the champ, if you don't retire, the champ, will someone fuck you up? So you ain't that tough? Right? Um and here it was, so now you can't run away from it, It's right there everyone for the world to see, you can go on Wikipedia and you can look at my record, you know? So, mm now I gotta deal with Elliot. So it wasn't it wasn't an opponent, it was me, that's that is our biggest enemy, is ourself. It's our greatest asset to, you know, you can't if you can get away from the flip side, the head, the head and the tails, the indian, the yang, you know, my anxiety like who I am, it makes me amazing, It makes me amazing. But it's also what makes them fucking terrible
Up Next
Popular Playlists
Best Yoga Podcasts: Listen & Learn New Poses Sour Shoe's Greatest Moments on The Howard Stern Show Listen to: Top 15 Funniest Barack Obama Quotes 9 Game Design Podcasts Every Game Designer Needs to Hear 7 Podcast Episodes About The Golden State Killer That Will Keep You Up at Night David Parker Ray & Shocking Audio of the Toy Box Killer You Need to Hear Podcasts About UFO & Aliens That Will Abduct Your Mind Audio Cheat Sheet To The Sexy Liberal Podcast Network Controversial Joe Rogan Experience Episodes Audio Wack Packer Beetlejuice Best Moments on The Howard Stern Show 12 Best Episodes of the NoSleep Podcast to Keep You Up at Night
Popular Categories
ASMR Business & Tech Cannabis Fashion & Beauty Gaming History Home & Garden Kids & Family Spirituality Travel
Add to playlist
New playlist